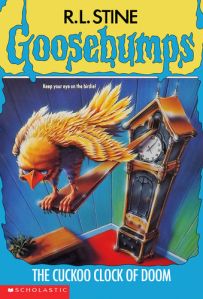 This just might be my favorite Goosebumps book. It is well-written, it is suspenseful, and it is interesting. Maybe it’s because I read a really terrible entry in the series right before reading this book, but I was surprised by how much I enjoyed The Cuckoo Clock of Doom.

The cover and title made me think and hope that this book would play with time travel, and it did, -ish. The main character, Michael, messes with the bird in a cuckoo clock his father brings home, and finds himself going backwards in time years at a time. He must find a way to stop time from moving back anymore before his existence is erased.

I couldn’t put the book down.

Let’s take a look at it. As always, if you plan to read this book eventually and are wary of spoilers, skip this entry.

This book surprisingly was not brought back for the Classic Goosebumps series, so it just has one cover. Luckily, it was updated and brought back as a digital release for Kindle, and it uses its original cover. I’m fine with that because this cover is actually pretty cool. I like the bright colors used. This isn’t necessarily a spooky book, so brighter colors on the cover work for it.

I like the little bit of green on both sides of the clock. I don’t know if it’s just me, but I equate green with evil in Goosebumps. Taking a look at another cover, Night of the Living Dummy, Slappy is encased by green as well. 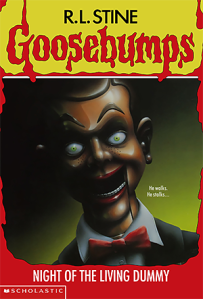 The bird doesn’t look scary like the Big Bad on other covers, but he looks unsettling.

Tagline: Keep your eye on the birdie!

I didn’t care for the tagline until I started thinking about why it might have been chosen. Having thought about it, I think it works for the book. The cuckoo is what becomes disfigured by Michael, which results in the conflict within the story. “Keep your eye on the birdie!” sets a sense of anticipation, as you wait for the hour to strike and the bird to fly out. Michael waited for that in the book. Time counting down or running out is a theme, so it works. Having said that, I think something relating more to time would have made a stronger tagline. “Time’s running out!” Something like that.

Michael Webster is tormented by his little sister, who he has nicknamed Tara the Terrible. Michael walks the reader through three different days in which Tara made his life a living Hell.

The first day is his twelfth birthday. Michael is surprised with a new bicycle from his parents. Upon receiving it, Tara climbs on the bike, knocking it over and putting a big scratch on it. Michael’s party guests arrive, and Tara announces to everyone that Michael has a crush on Mona, a girl attending the party. Later, she opens all of his birthday presents before he can enter the room. At cake time, she trips him, causing him to fall face first into his chocolate birthday cake, humiliating him in front of his friends.

A week prior to his birthday, Mona and two girls came over to rehearse for the school play with Michael. The school was putting on The Frog Prince, and Michael played the part of the frog. When the girls arrived and rang the doorbell, Michael told Tara to tell them that he’d be right down, and went upstairs to his room to change into his costume. While changing, Tara opened his doors and walked the girls right in. They saw Michael in his underwear.

A couple days before that, Michael was playing basketball in the school gymnasium, and Tara stuffed a bully’s hat into Michael’s backpack. When the bully noticed his hat missing and found it in Michael’s backpack, Michael got beat up.

I can understand why Michael hates Tara. I know she’s fictional, but I hate Tara after reading all that she’s done.

Michael’s father bought an antique cuckoo clock which arrives one evening. It is  apparently ugly, because Michael’s mother doesn’t want it in the den. Mr. Webster has had his eye on it for 15 years, though, so the family puts it in the den. Does Mr. Webster not have a Man Cave? The clock was too expensive, but the owner of the antique store lowered the price after noticing a flaw. The family tries to discover the flaw, but can’t find anything wrong with the clock.

Mr. Webster says that the clock is enchanted. It supposedly came from the Black Forest of Germany. The man who built it had magical powers, and if a person can discover the clock’s secret, he or she can travel through time. Michael’s mother gets annoyed with Mr. Webster for telling their kids “wild stories.” She says it’s not good for them. I’m curious if the Webster kids were allowed to believe in Santa Claus.

Tara can’t keep her hands off the clock and gets chastised by their father. This is the first instance Michael recalls of his parents chastising Tara, because whenever Michael has tattled on Tara in the past, his parents had always defended Tara and chastised Michael. He sees this as an opportunity and decides to get Tara in trouble once and for all. He sneaks out of his room late one night, waits for the cuckoo to come out, and twists its head backwards. He goes to bed happy with himself, excitedly anticipating Tara getting in trouble.

Turning the cuckoo’s head must be the secret to the clock’s time travel powers, because when Michael wakes up the next morning, it’s his birthday again. Despite his best efforts, he lives the day nearly the exact same way as he did the first time.

Michael ends up reliving the other two days he took the reader through at the beginning of the book, and like his birthday, he couldn’t change what happened to him: he ended up humiliated and beat up like on the original days.

Over the next few days, Michael goes back years in his life at a time. He relives a day in third grade, second grade, kindergarten, pre-school, and finally a day as a baby. Despite looking and feeling younger, Michael is his twelve-year-old self inside his head. He amazes his parents by tying his shoe, and confuses kids his age by talking with sense. For some reason that does not at all contribute to the plot, Michael was apparently slow. His dad’s “about time” reactions to Michael’s accomplishments, and his parents arguing about his mental progress was funny because it happened in front of 12-year-old Michael stuck in the baby or little kid’s body, but felt unnecessary.

Oh, and Michael is conscious as a baby while his mom changes his diaper. How horrific.

Michael tries to get to the cuckoo clock to turn the cuckoo’s head back around to push time forward again, but it’s a hard task, as his family didn’t have the clock in the past, and he loses his freedom as he gets younger. Along the way through time, his sister, Tara, disappears. Michael begins fearing that he is next.

Somehow, as a baby, while in the antique shop with his parents, Michael gets away and manages to turn the cuckoo clock around. He also changes the year on the clock.

Michael wakes up the next day and it is his birthday again. There is one major change in his life: he does not have a sister. He has an amazing birthday without Tara there to mess everything up. Later, when invespecting the clock, he realizes the flaw the antique store owner must have been talking about was a missing year. 1988(, 1996, or 2008 depending on which version of the book you read), the year Tara was born, is missing. When Michael sent time forward again, the clock skipped that year, and Tara was never born.

Michael supposes there is way to go back in time and get her, and says he should probably do that, maybe.

The Cuckoo Clock of Doom is an unconventional Goosebumps title because it’s not typically scary. There’s no monster or evil entity, and the book has a happy ending for the protagonist. I would argue that it is still scary and suspenseful, because Michael feared being wiped from existence. I wonder if this fear is a little too mature for young readers to grasp, however. Reading this as an adult, this book is the strongest of the three I have read so far. It’s also the most well-written. The characters seemed dynamic, the story made sense, and the ending wasn’t completely random.

Are we sure that this book was written by Stine?

Next time we will be braving the horror at Camp Jellyjam! What would you like to see after that?

2 thoughts on “Goosebumps: The Cuckoo Clock of Doom”

Todd Reads is an oh-so-creatively-titled books blog. My name, naturally, is Todd, and I am your host and entertainer this morning, afternoon, evening, or night. This blog focuses a lot on book series I read as a kid and am making my way through again at a glacial pace as an adult, but I do write about other books. Check out the About page to learn more about what I am doing here.

After several years of running a Goosebumps theme, I decided it was time for an Animorphs one. With Ax and Tobias, that’s me morphing my corgi, Helo. I’m an Animorph, y’all. Thank you, Kara Wheat, for my amazing header.

I am thrilled that you are here, and I would love to discuss these books with you. Leave a comment on any post and I will always reply.

Thanks for visiting. I hope you enjoy your stay.