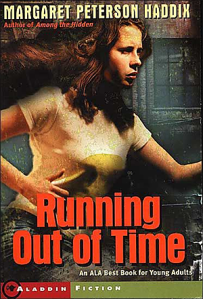 I recently taught Running Out of Time by Margaret Peterson Haddix to two Eighth Grade ELA classes. I have essentially read this book three times: on my own before teaching it, and aloud to two different classes. I’ve had enough. I did not like this book. It has been taught by other teachers at my school for years, and when I was given my classes, I was given the book. I made the most of it. In this entry, I’m going to tell you what I did not like about this book. However, acknowledging its merit to student, I’m going to discuss the benefits of teaching it as well.

I wanted to give a spoiler-free plot summary of this book, but it is extremely difficult to talk or write about this book without spoiling it. If spoilers concern you, stop reading here.

Jessie Keyser lives in a small village called Clifton in Indiana in 1840. Jessie’s mother is a medical caregiver of sorts, and she discovers children are sick and dying of Diphtheria. Unable to provide help to these children, she sets Jessie out on a journey to get help. She informs Jessie that the year is actually 1996. Jessie, who has been living in the 1800s her entire life, has to navigate the outside, “modern” world. Can she escape Clifton? Can she pass as a citizen of the “future?” Can she get help in time, or will she run out of time? (Ha.)

Jessie discovers that Clifton Village is a tourist attraction, and people living in 1996 visit Clifton and watch people live in the 1800s. It’s actually kind of sick and disturbing. Posing as a student in 1996, she goes on a tour of the “museum”, watching her friends and loved ones from behind mirrors. She finds a way to escape, and she gets help from a man named Mr. Neely her mother told her to find, only he turns out to not be Mr. Neely. The man posing as Mr. Neely intends to kill Jessie, but she escapes from his apartment, calls a news conference, and saves the day. Kind of.

Jessie unfortunately ran out of time and some kids died of Diphtheria. Jessie passes out at her news conference sick with Diphtheria as well. However, she uncovers a sinister plot by evil scientists and gets Clifton Village shut down. Apparently, Clifton Village was set up as an experiment. Diphtheria was introduced to the village to kill off the weak so that the strong would survive and pass on strong genes. That’s kind of interesting, I guess.

The book ends with Jessie, her parents, and her profusion of siblings back in Clifton trying to adapt to the modern world. Pa has been tasked with caring for Clifton Village until it sells, so the family gets to slowly enter the outside world. Jessie informs the reader that not all is well. Ma cries when she thinks no one is looking, and Pa is seriously messed up and needs a psychiatrist to help him adjust to living in 1996. Jessie knows she is going to be okay because she is strong and brave, and she always has been.

The book is okay, I guess. My students really liked it. One student in particular, a reluctant reader, read ahead and finished the book way before the class because he liked it so much. The plot is fast-paced, the story is interesting, and the prose is easy to read.

One of my main problems with the book is it is shallow. It is an interesting story and that is about it. There are few, if any, literary elements to pull out and dig into. Typically when I read to students, I stop reading at spots and point out symbolism, interesting metaphors and similes, foreshadowing, shifts in mood and tone, characterization… With this book, I could only talk about the plot.

The characters are pretty flat, the protagonist, Jessie, doesn’t change throughout the book, and most of the antagonists are fat. I kid you not. There is so much fat-shaming in this book. I felt uncomfortable reading it aloud at times.

So, why teach it?

If you have seen an M. Night Shyamalan movie called The Village, you will notice a lot of similarities. I am not going to dive into the intricacies of plagiarism here because no legal recourse has been taken by Haddix or her publishers against Shyamalan, but I wanted to mention it. It would be interesting to  watch clips of The Village with students while reading this book and compare and contrast the 1800s settings and the big reveal. At my school, it would require a film slip, and we are already watching pieces of The Truman Show to consider the voyeurism present in Running Out of Time.

What The Village does better is create a dark and suspenseful mood, and it nurtures and keeps that mood until the end of the film when the audience realizes the story is taking place in the 21st Century. Running Out of Time has its big reveal early in the novel, and any suspense is killed early. Jessie’s mother explains what Clifton Village is and what is happening directly, and so when Jessie “discovers” it, the reader is merely watching what they already know unfold. This is less exciting.

However, the reveal was fun to read to my students. Their jaws dropped to the floor and they freaked out a little bit. It was really cool seeing them have that big of a reaction to a book.

Initially set in the 1800s with children dying from a disease we don’t really talk about much these days, Running Out of Time provided a lot of opportunities to present information texts to students. There are a ton of information text standards in Eighth Grade ELA, and we hit a lot of them with this book. We read about life in the 1800s, we read about education in the 1800s, and we, of course, read about Diphtheria. Diphtheria allowed us to even incorporate articles about the pros and cons of vaccines, which was interesting to students and topical because of COVID-19. It was really interesting reading their thoughts and connections.

We got to practice annotation, writing objective summaries, comparing and contrasting texts, and more. Because the book was such an easy read, we got to work these information texts and standards in without losing time. If I didn’t have time to finish a chapter, I would have students finish it on their own, and it was no problem.

My students really got behind the activity and had a lot of fun creating flyers. Check out some of their work:

While I did not like the book, I have to admit it has its merit to students and education. The teacher across the hall from me this year really likes this book. I like the educational value we were able to pull from it, but we had to get really creative. I also really like how much my students seemed to enjoy this book. It is an easy read and it kept their attention.

If I teach this book in the future, I would like to read up until the 1996 reveal, which comes pretty early in the book, cover the information texts we read this year, and then stop there. This would work as a teaser to students, and because they are so interested in the plot, I think many would continue reading the book on their own. That’s a teacher’s dream, right?

Todd Reads is an oh-so-creatively-titled books blog. My name, naturally, is Todd, and I am your host and entertainer this morning, afternoon, evening, or night. This blog focuses a lot on book series I read as a kid and am making my way through again at a glacial pace as an adult, but I do discuss other books. Read the About page to learn more about me and what I am doing here.

Even when I am too busy to update this site, I am thrilled that you are here, and I would love to discuss these books with you. Leave a comment on a post about my review or your own thoughts on a book, and I will always reply. Please, please get your nerd on with me. Slappy would want you to.

Thanks for visiting. I really hope you enjoy your stay. :)