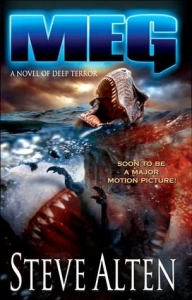 I love sharks. I will read anything with a shark on the cover. A book about the Megalodon, ancestor of the Great White Shark? Yes, please. I picked up and read this book around 2010. I still have the physical copy I read on my bookshelf. I didn’t remember much of it, but I remember enjoying it a lot, and I want to read the sequels, so I gave it a reread. It’s as good as I remember.

This book is a whirlwind of a read. It starts heavy and it keeps up its intensity to the end. I read huge chunks of the book in a sitting because I found it so difficult to put down. It reads like a movie, carefully plotted, with excitement at every turn. I hear this book has been made into a movie, and I kind of want to watch it, but I doubt it will be as good as this book.

Jonas Taylor is an ex-Navy submarine diver who is obsessed with the prospect of the Megalodon, the ancestor of the Great White Shark, surviving today. After a traumatic deep-sea dive to the Mariana Trench in which he believes he came in contact with one of the creatures, freaked out, and surfaced too quickly, killing two scientists, Jonas has dedicated his life to studying the Megalodon.

An old friend of Jonas’s, Masao Tanaka, convinces Jonas to accompany his son, D. J. Tanaka, back into the trench to retrieve a remote submersible designed to detect earthquakes that has stopped working. In the trench, Jonas comes in contact with a Megalodon again, and events unfold that bring the Megalodon to the surface. The greatest ocean predator in the world is now loose. No whale or human in the sea is safe.

Jonas has to find a way to capture or kill the thing he fears most.

Meg is not a very deep book (Haha, see what I did there?), but it has a lot of good things going for it. Let’s start there.

1. Plausibility – I taught a science fiction short story unit to eighth graders a couple months ago, and one of the things I told my classes is good science fiction is in the realm of possibility. Sure, it can be a very wide realm, but the reader needs to believe this could happen. Steve Alten’s Meg, at least for this scientific layman, is in the realm of possibility. Alten put a lot of time and care into writing science into the book. Just when I began to ask, “But what about…?”, Alten addressed my concern. One of the things Alten took careful consideration of is the Megalodon’s rise to the surface.

The Megalodon was surviving down in the Trench, miles below the surface. The water is warm down there due to hydrothermal plumes, but there is a large section of icy cold water the Meg cannot survive in right above the Trench. The idea that Alten pitches through Jonas is that the Meg does not know that the water gets warmer above the colder section, and does not rise into the colder section because it is made to survive. D. J. Tanaka is killed by a male Megalodon that becomes entangled with D. J.’s submersible. D. J.’s crew begins to pull D. J. and unknowingly, the male Megalodon to the surface. The Megalodon gets trapped in wire and cut and begins to bleed, and a female Megalodon comes from out of nowhere and bites into the male. With the male still rising, the female follows feeding on the male and bathing and keeping warm in the warm blood flowing from the male Megalodon. This allows her to rise past the colder layer of water into the warmer, top layer.

There are several other examples of scientific explanations that make the events that take place in this novel plausible.

2. Plot – The plot is the biggest strength of the novel. Meg reads like a movie. I couldn’t put the book down, I wanted to know what would happen next, and even in the parts of the book where I knew exactly what was about to happen (as the book does get a little cliche), I enjoyed watching it unfold. The book is so jam-packed with action it leaves little room for else, like characterization which I’ll touch on below.

The end of the book had several things going on at once, and Alten expertly bounced between them all. I didn’t get lost.

3. The Kills – Let’s be real; the cool shark attack scenes are a big reason we read books about sharks. Touching on my first topic, the kills need to be plausible, but they also need to be inventive and exciting. The kills are all three in Meg. Meg takes down huge humpback whales and boats, so would smaller humans be overkill, and thus lackluster and boring? I worried about that possibility, but I didn’t need to. The human kills are frightening, sometimes gruesome, and yes, cool. A guy gets trapped in the shark’s mouth, and the shark’s tongue pushes him forward to her chomping teeth. A woman delicately gets pulled off a ladder by the shark…

The kills were also plentiful, and they happened to characters I hated and wanted to see die, such as Jonas’s cheating wife, Maggie, Jonas’s hateful, ex-commander, and a bully surfer. One might argue that having only bad or evil character die would be a flaw of the book, but these kills are satisfying, and viewing the book as the entertaining read it is, I can’t complain.

The Megalodon’s upper torso continued moving higher, past the starboard rail, the crewmen screaming, backing away — as Maggie, barely conscious, imagined a warm scarlet blanket was being wrapped around her waist, protecting her against the painful cold.

Tossing his mangled body into the air above her open mouth, the shark snatched its prey as a dog might catch a biscuit!

I would have liked more writing like this; Alten has shown he can be a good writer, but descriptions like these were few and far between. His prose is pretty straightforward, unfortunately.

This brings me to where the book could have been better.

1. Characterization – Everything we learn about Jonas, we know by the first third of the novel. Apart from overcoming his fear and standing up for himself, which he was nearly doing even at the beginning of the book, Jonas does not grow or change very much in the book.

The other characters, too, are archetypes of characters we have all seen in other books and movies. Maggie is a fame-hungry journalist. Mac is a comical, daring helicopter pilot and friend to the protagonist. (I swear, I have read at least two other books with a helicopter pilot like him also named Mac.) Masao is an older Asian man who departs great wisdom to the protagonist. Yawn.

Terry was the most interesting character to me. In the shadow of her dead brother, D. J., and being a woman, her father did not let her dive, and she was so desperate to prove herself. Unfortunately, she doesn’t get to do much by the novel’s end. I look forward to reading more about her in the sequels.

I saw Jonas and Terry getting together from the beginning of the book. Terry was annoyed by Jonas and the two bickered. Like everything else relating to this book’s characters, romances like theirs are commonplace in fiction.

2. Description – While I do think Alten’s scientific descriptions add to the plausibility of the narrative, I believe the book is bogged down with description. Every boat and submarine is described in detail, and that became exhausting and boring to me as a reader. On the other side of that coin, the descriptions of the Megalodon’s biology, the behaviors of whales, and the environment of the Mariana Trench were necessary and interesting. The descriptions of the Megalodon’s biology got a little repetitive; I felt like I read “ampullae of Lorenzini” a hundred times. It pulled me out of the book.

Luckily, the plot drew me back in.

Meg is not a literary masterpiece, but it is enjoyable for what it is. If you are looking for a light, action-packed, fast-paced read, this one is a good one. I think it would be a great book to market and recommend to reluctant high school readers and maybe even some mature middle schoolers. There is a little bit of bad language, but no sex, and the kill scenes are not grotesque, so I think eighth and ninth graders could handle it.

Todd Reads is an oh-so-creatively-titled books blog. My name, naturally, is Todd, and I am your host and entertainer this morning, afternoon, evening, or night. This blog focuses a lot on book series I read as a kid and am making my way through again at a glacial pace as an adult, but I do write about other books. Check out the About page to learn more about what I am doing here.

After several years of running a Goosebumps theme, I decided it was time for an Animorphs one. With Ax and Tobias, that’s me morphing my corgi, Helo. I’m an Animorph, y’all. Thank you, Kara Wheat, for my amazing header.

I am thrilled that you are here, and I would love to discuss these books with you. Leave a comment on any post and I will always reply.

Thanks for visiting. I hope you enjoy your stay.